How To Install Vinyl Flooring in Your Van 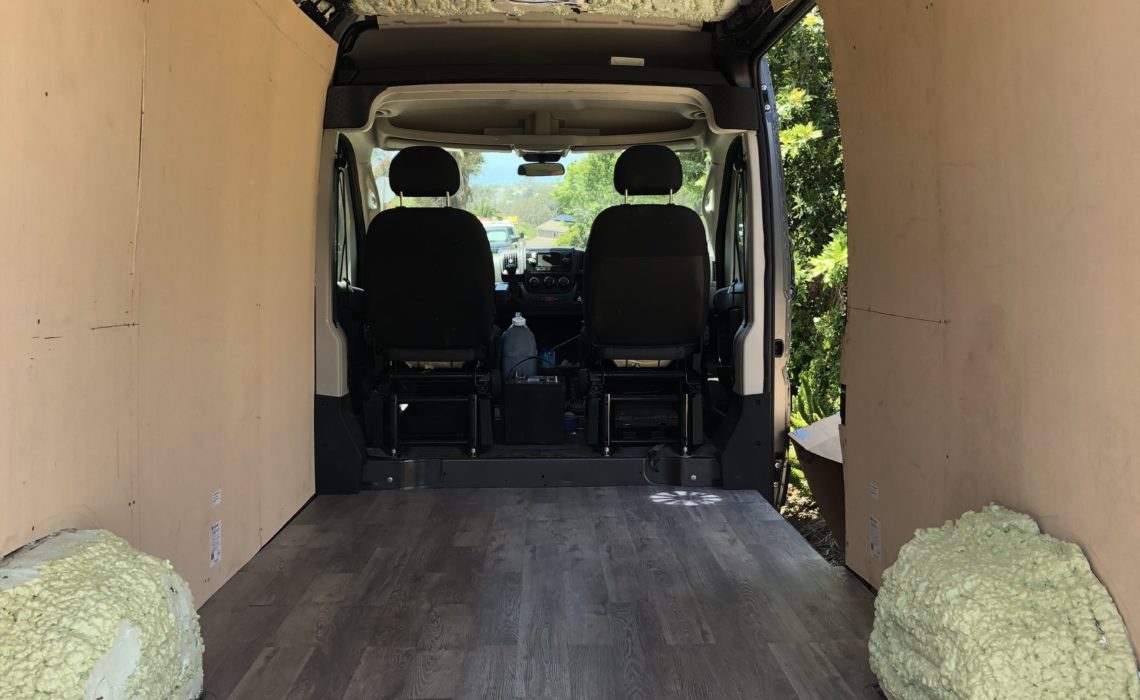 This article will cover how I chose my flooring type and color, and where to install it in the van. We decided to install it across the entire subflooring of the van.  This was less cost effective, but we liked having a flat surface area when we started installing the benches, cabinets, etc. Keeping the vinyl planking throughout the van also gives the lower cabinets a nice finished look when we open them.

Several different types of flooring exist, each with their own benefits. I asked a few trusted sources that have renovated kitchens, and they said vinyl or bamboo would be a good choice. So I researched them both. I found a helpful, and near comprehensive comparison discussing the pros and cons of bamboo vs. vinyl. I ultimately went with vinyl as that seemed the most durable and resistant to water.

When it came down to the look of the flooring, as most would, I turned to Instagram and Pinterest for ideas. I struggle with interior design, so I consulted a friend. She will be helping with the entire interior design process, and she helped me figure out my initial steps for selecting a color.

I went to Home Depot and started choosing different vinyl options. After talking with one of the employees, I was able to grab a plank from an opened box as well as some of the smaller samples they had available. 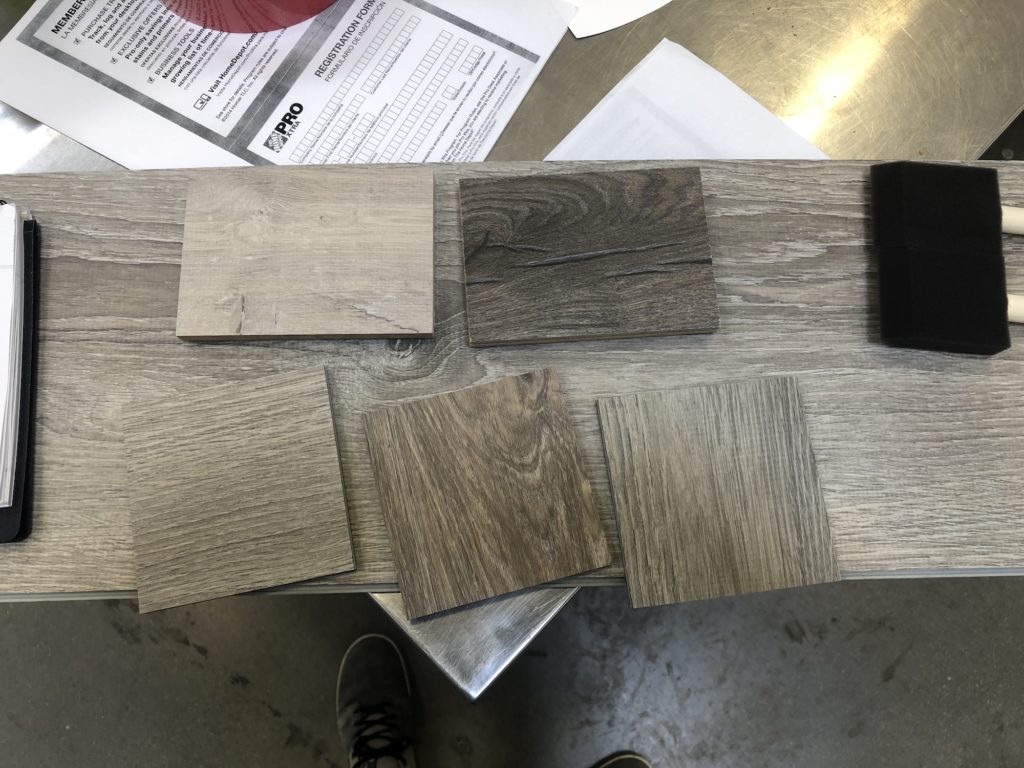 Additionally, I bought a few off-white colors and proceeded to paint one of the cardboard pieces I had. This wasn’t going to look the same as it would on my final wood, but I figured at least I had a big canvas to work with. 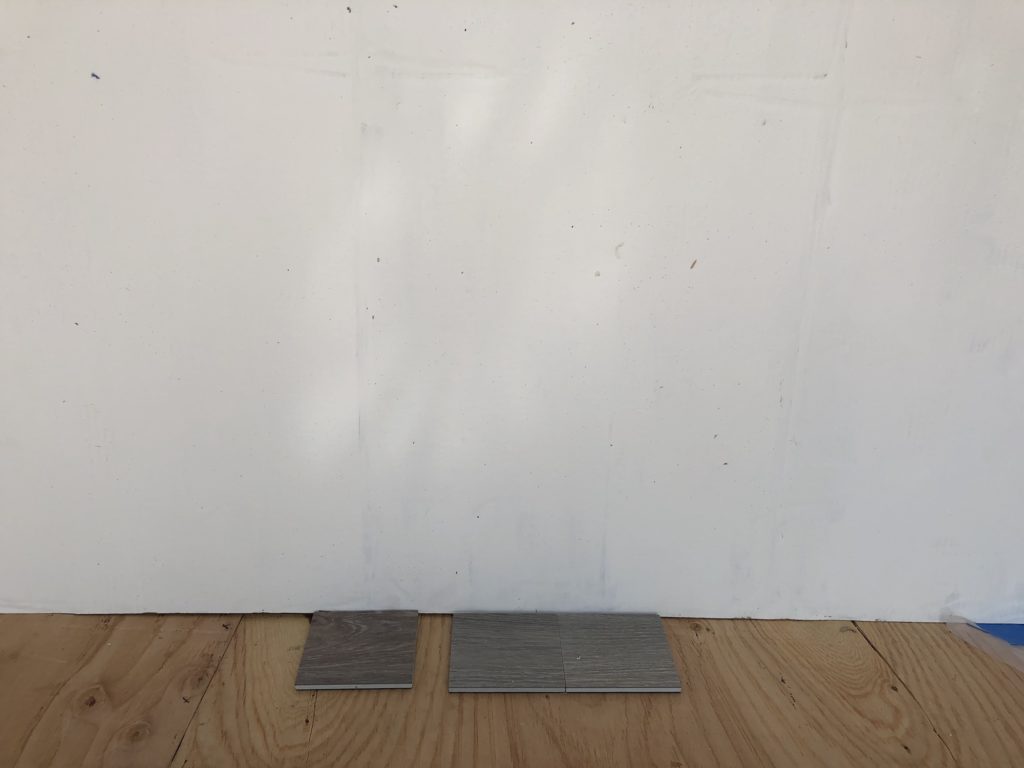 I went to a local shop near me, Solana Flooring, and continued looking through some options. 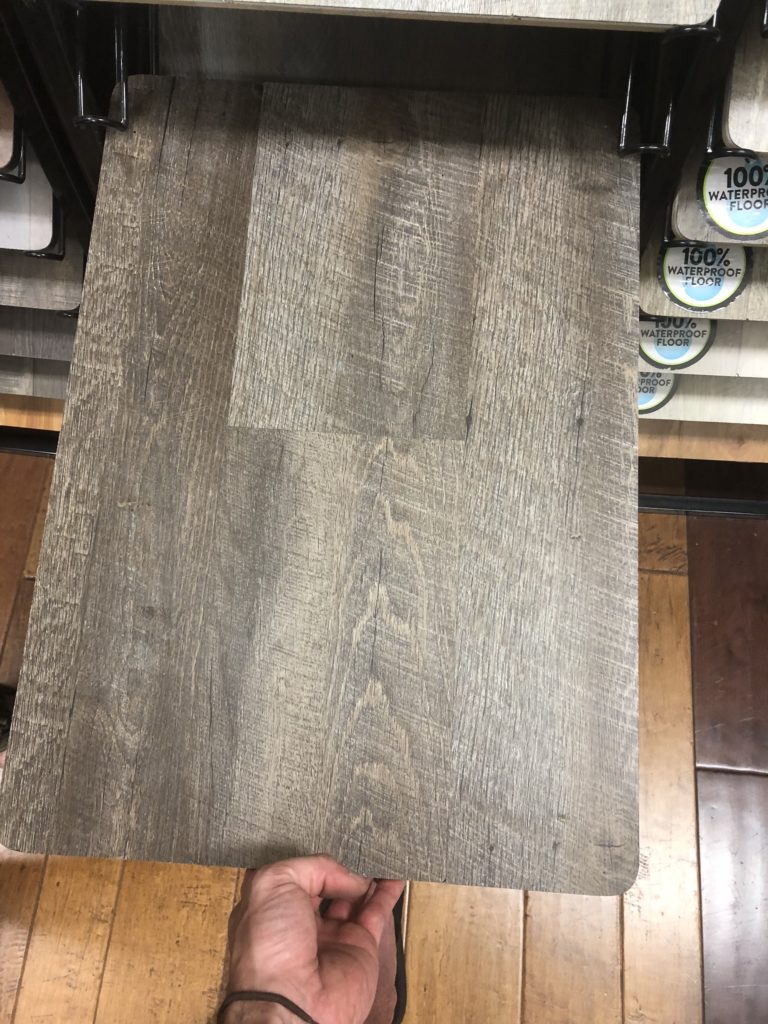 Finally, I made my choice and went with the LifeProof Biscayne Oak Vinyl flooring. The only mistake I made was not realizing that I had purchased the Herringbone version. 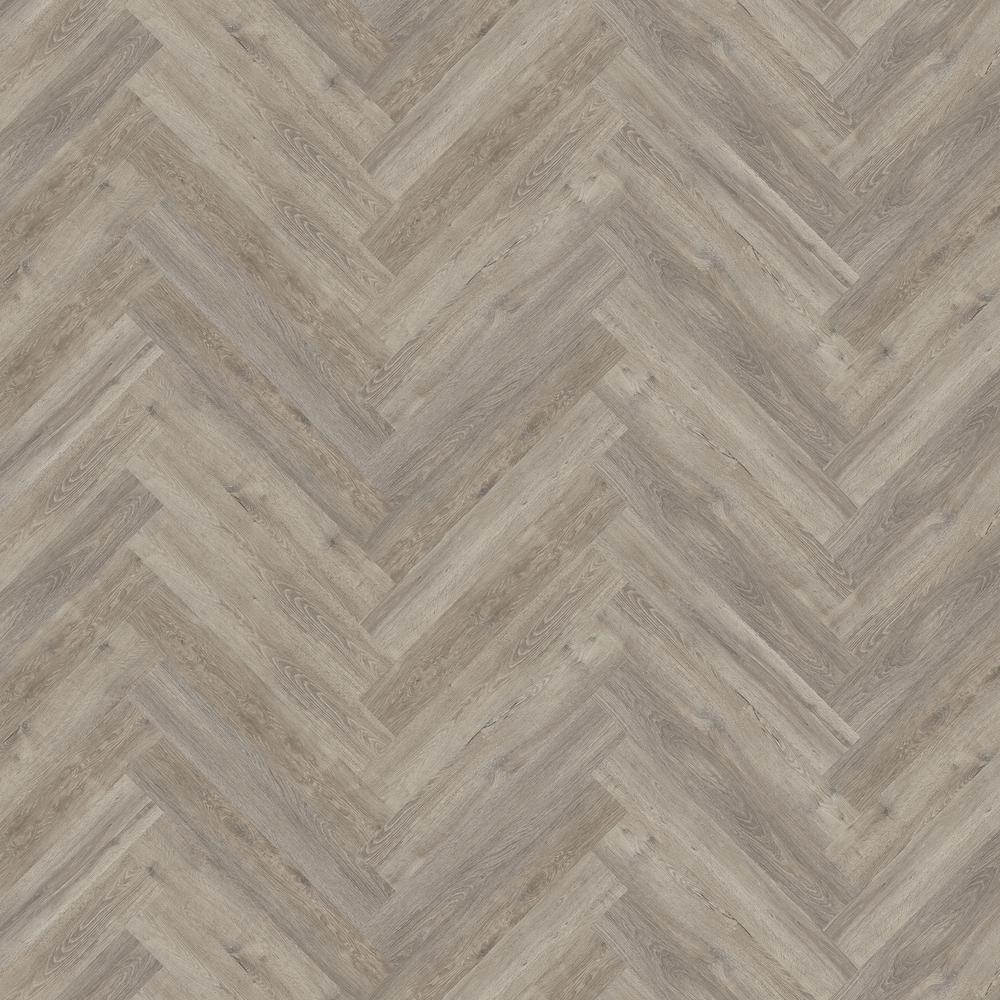 This was definitely a rookie mistake. I had the choice to return it and get a different version, but that would require waiting, which I wasn’t too keen on since it took 2 weeks for this flooring to come in.  The good news is we had a little hack that let us install it pretty easily, we’ll tell you about it in the execution steps. 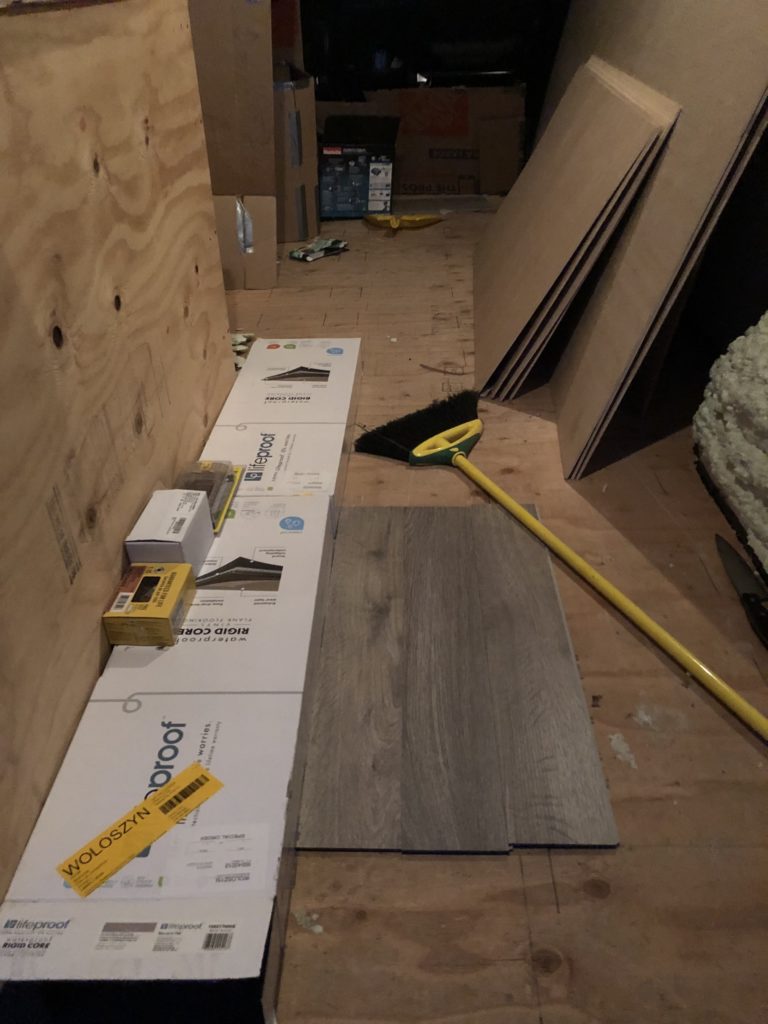 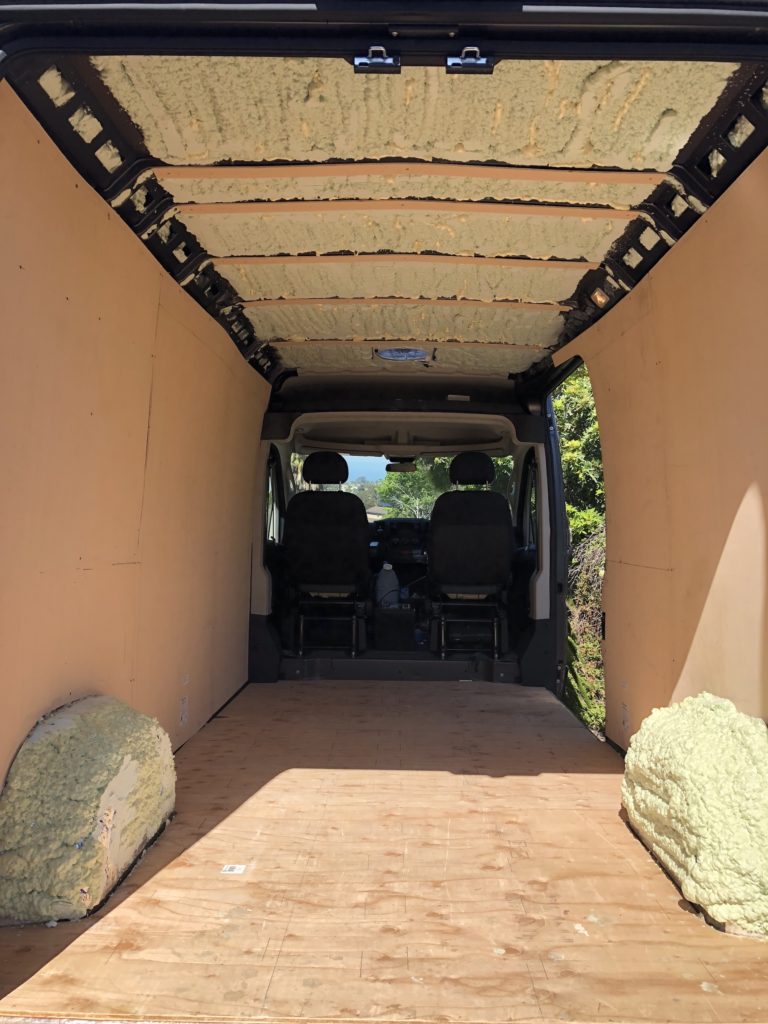 Dust and debris can cause bumps in vinyl plank flooring. I swept the area with a broom to remove anything left over on the sub floor. A few areas needed to be scraped for FoamIt from our spray insulation day.  Once you’ve cleaned the area, try to avoid getting any new dust or debris on the sub floor while you work.

Since I had bought flooring that was the herringbone style, I had to prepare a bit differently. I opened the package and started lining up some planks. Initially, I didn’t notice the differences in the boards, but I want to point out the differences I discovered. 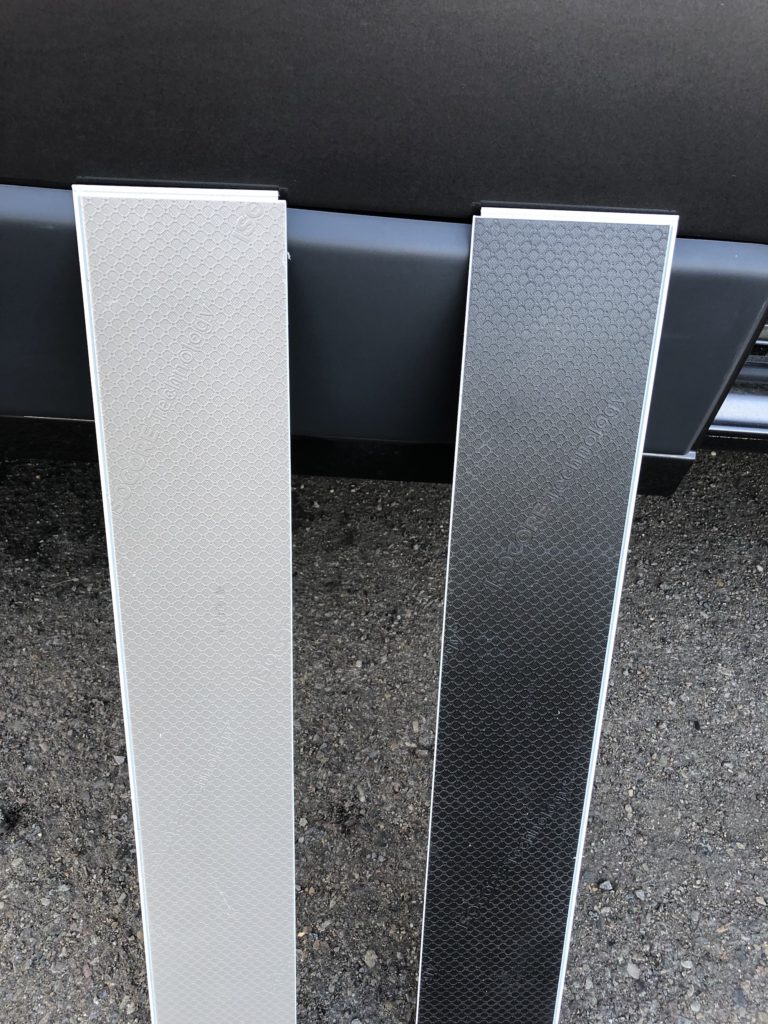 The grey boards have one long straight edge, with one horizontal edge. In the photo below, I show how the boards intersect with each other (grey + grey). 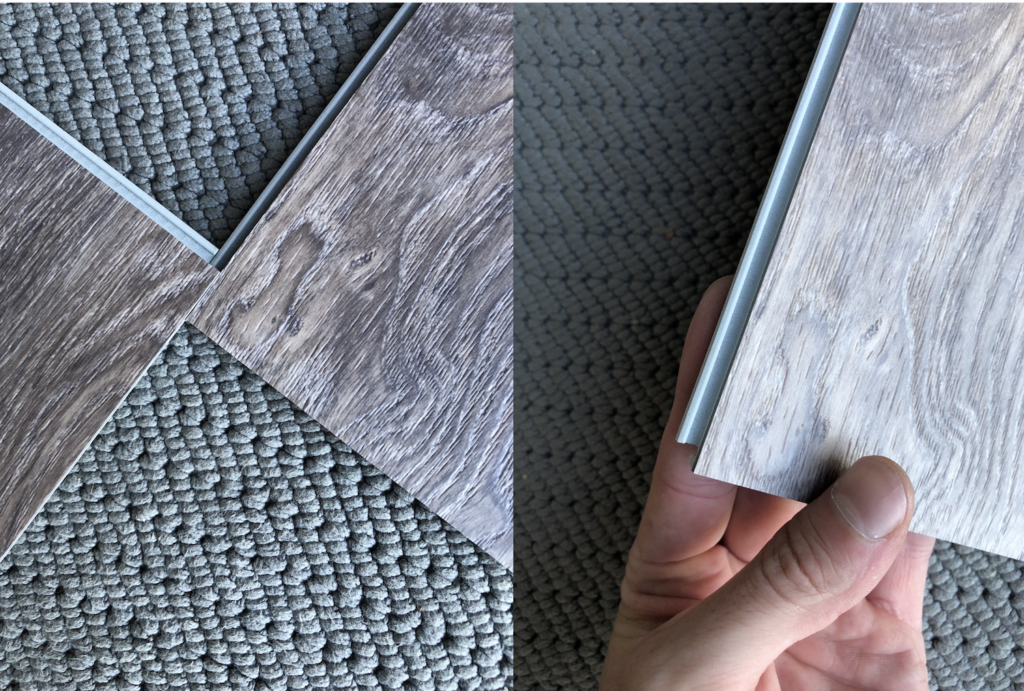 The black boards have one long straight edge but at the end it has a little bump at the end. In the photo below, I show how that will look with another board attached (black + grey). 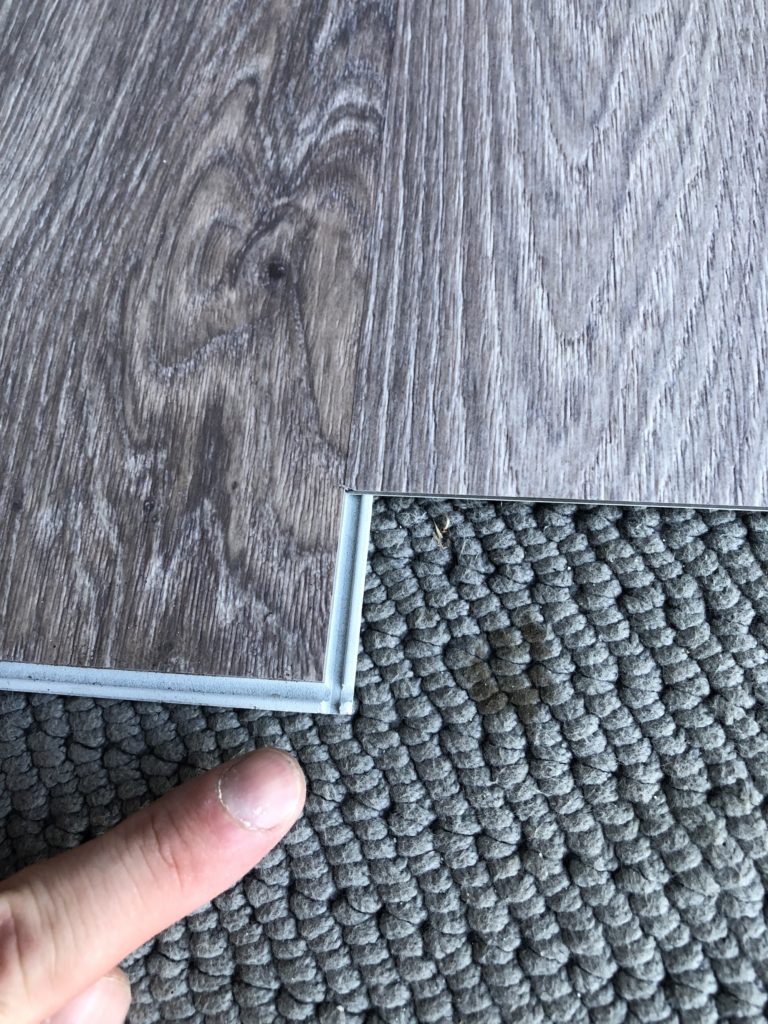 Ben and I figured we could use all of the boards on one side and then just make the intersection work from grey to black by removing that extra bump and shave a little down to keep that intersection tight and flat. See below, the grey board will now be able to slide next to the other plank properly (grey + black). 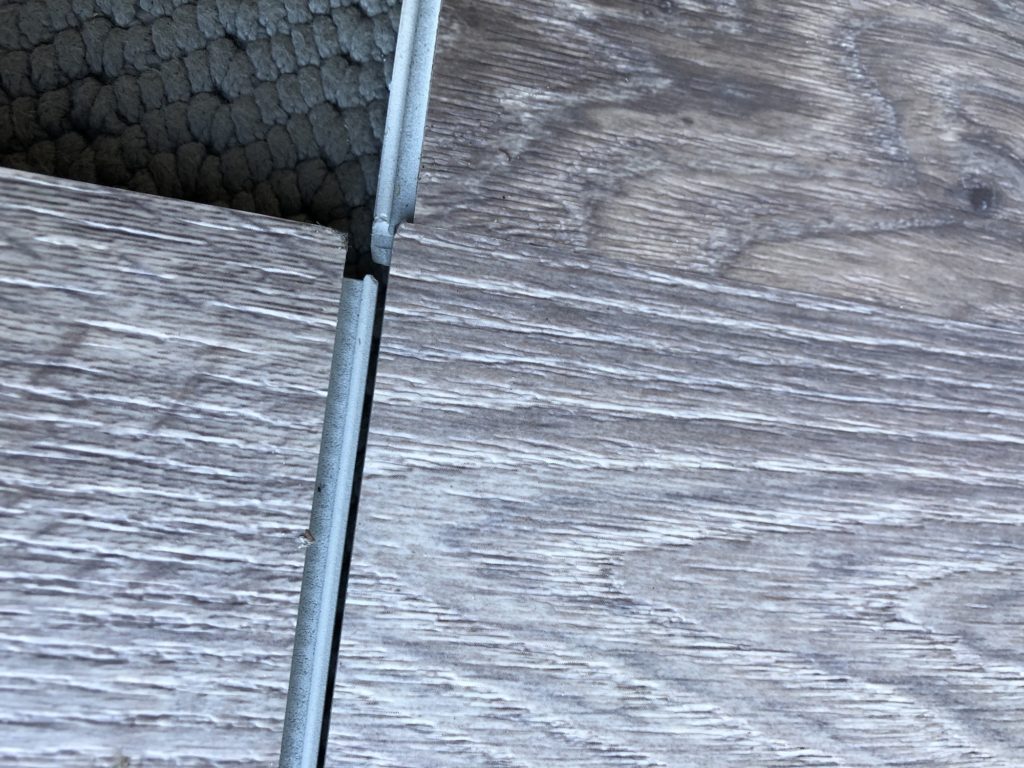 Direction of the boards:

I planned to install the vinyl planks going the length of the van, starting from the driver side of the van to the passenger side. One note, that you’ll see below, is that I put them together in the middle of the van first, before I pushed them towards the driver side.

Line the planks up and start putting them together the long way so that you are sliding each plank into one another. Choose whichever color and stick to that for now until you make the transition near the middle of the van.

I kept using planks until I ran out of the same color boards I had been using, From there, I had to apply the the technique from above to make sure that the grey + black intersection was smooth. I kept building out the floor until I had enough to move over my wheel well, in which I’d need to make a pattern and cut it out with the jig saw. 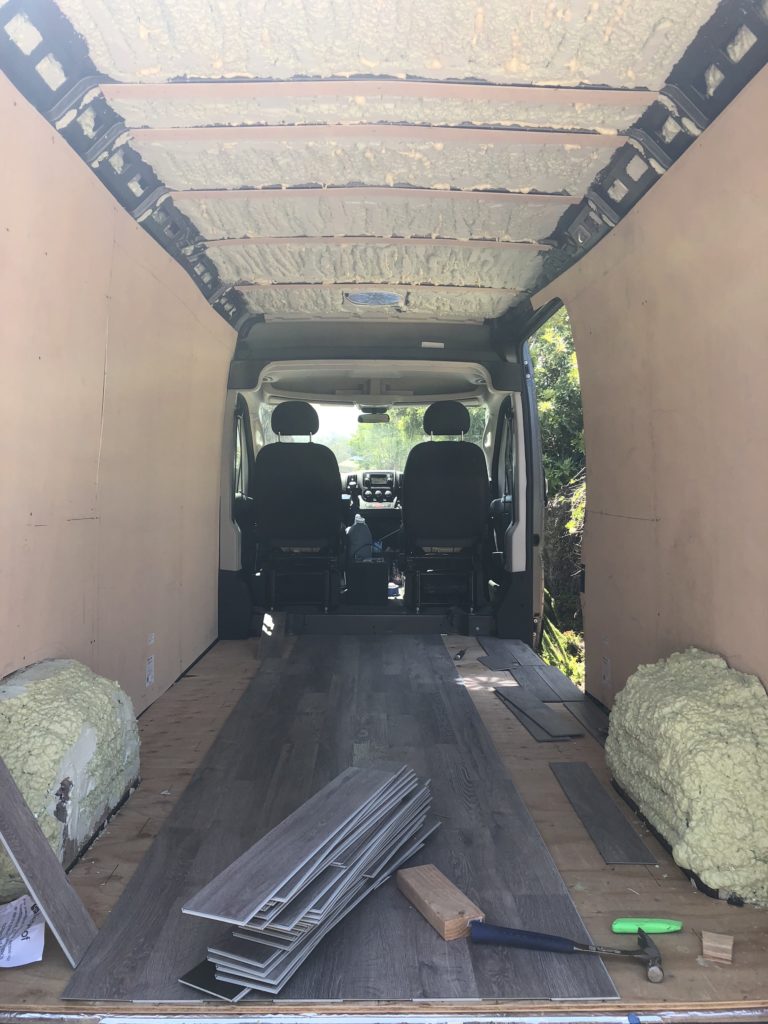 Unfortunately I don’t have photos of the template or cutting with the jigsaw. This templating needs to be done for the wheel wells, as well as up near the front of the van as shown in the photo below. This is very similar to the templating we had to do for our sub flooring. We have some photos there that you can refer back to for instructions on creating a template. 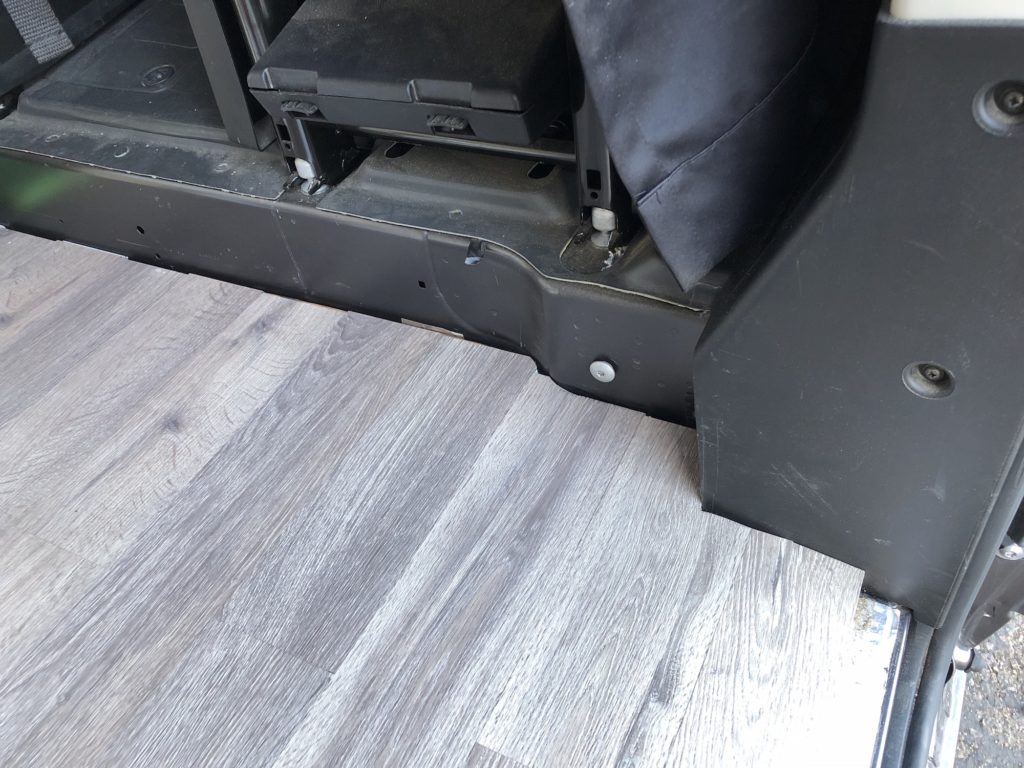 You’ll need to trim the boards at the back of the subfloor as well. I marked the last pieces and used a jigsaw to cut any overlap on the subfloor. 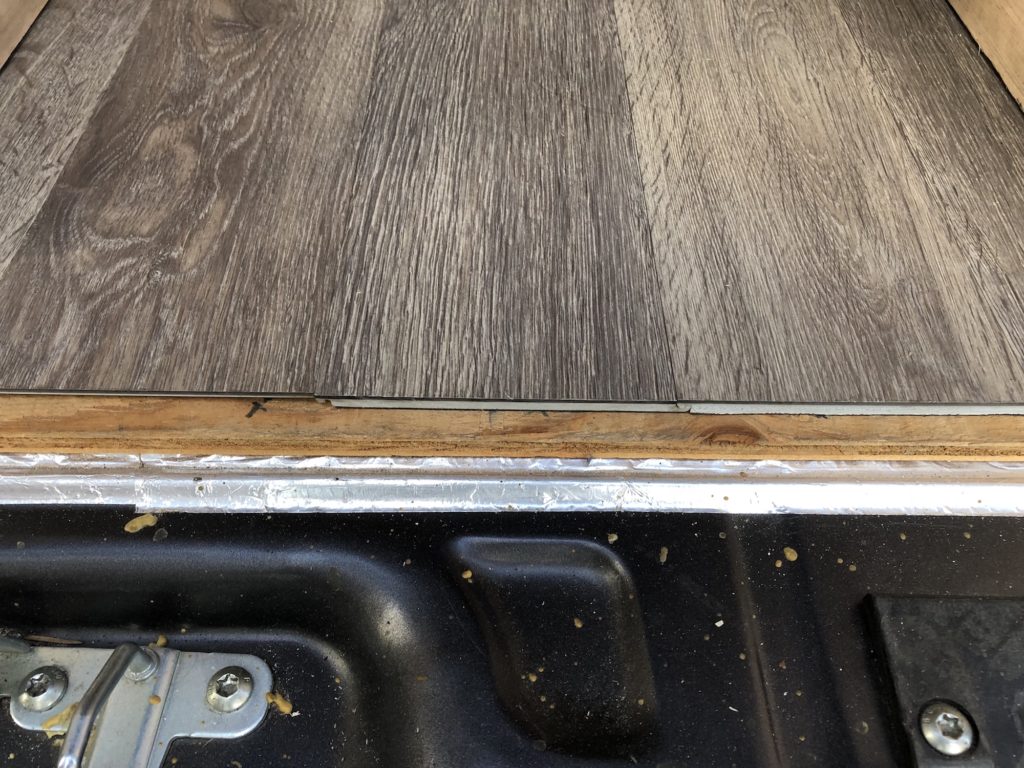 Next step is to measure and trim the vinyl plank that extends over your doorway. You can fit your plank, then measure the amount that overlaps your subfloor. Then you can run a jig saw through each piece before you slide them together. 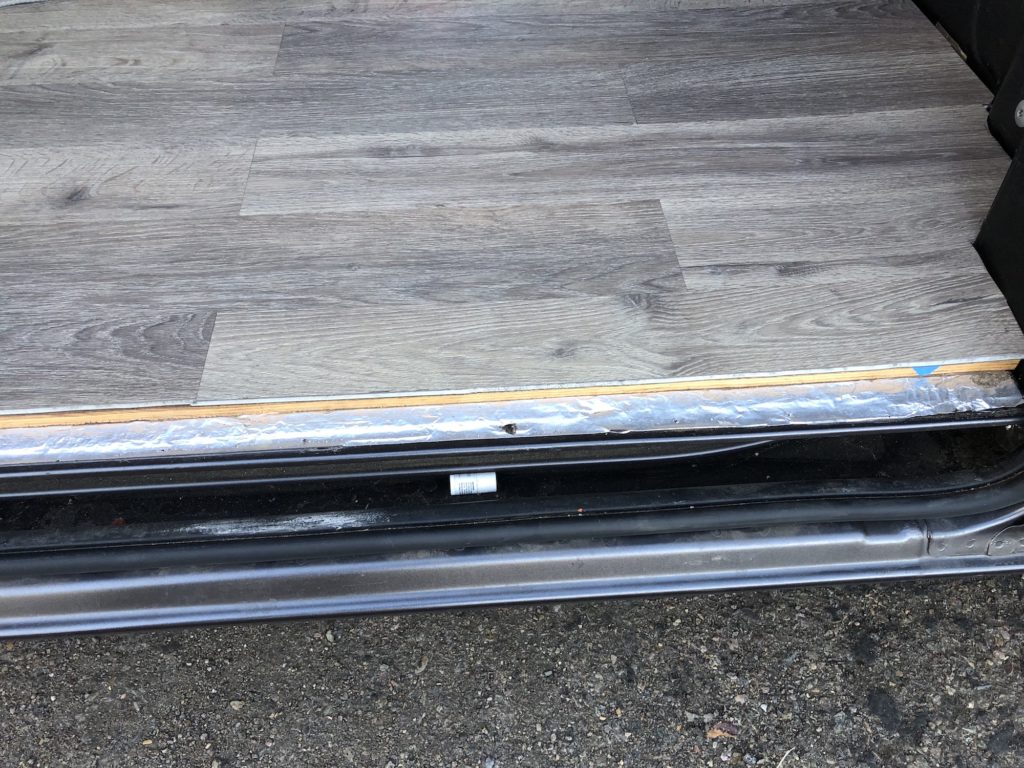 I noticed a few boards were not flattening out everywhere at the intersecting seams. As a final step, I used a hammer over a piece of wood and gently hammered the planks down to lock in place. This gave me a flat surface at the seams with no bumps or edges at the seam. 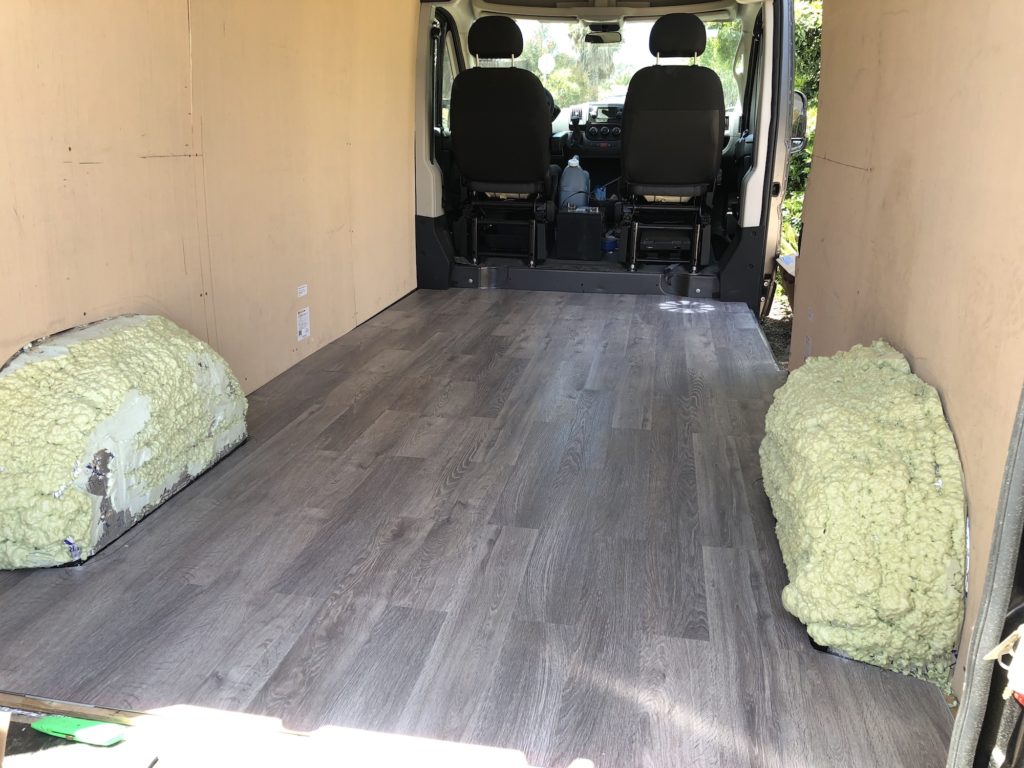 You’ve completed the installation of your vinyl planking. Make sure you always put down cardboard of a protective surface so that you do not scratch your floor. It will happen, but it might as well be from use and not a dropped hammer! Next build, we hope we can provide additional photos of these steps, but let us know if you have any questions or concerns!

Installing the flooring was really easy, although I’m sure it could have been easier had I chosen the correct style. Herringbone looked really cool, but it would have been much harder to install in the van.

I haven’t had any issues with the flooring yet. It is high quality and the only regret is not laying down a protective surface as I worked on other items after we put it in. I didn’t damage it too much and scratches happen with use, but keeping it newer longer is never a bad idea! No complaints otherwise!

How To Make Shredded Beef with an Instant Pot